“Being deeply loved by someone gives you strength, while loving someone deeply gives you courage”-Lao Tzu

Hope you thanked members of the Armed Service for their sacrifices on Veteran’s Day, as well as celebrated World Kindness Day on Wednesday Nov 13th!

This week: Drive All Blames Into One
Teachings for Awakening the Heart in Everyday Life: 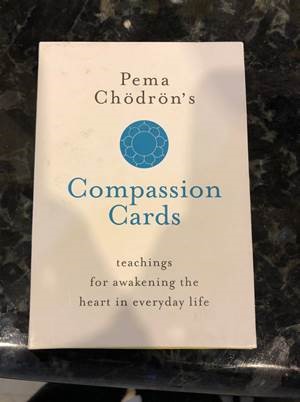 Pema Chodron’s Compassion Cards- Teachings for Awakening the Heart in Everyday Life are a fun and thought-provoking card deck drawing from the Root Text of the Seven Points of Training the Mind steeped in the Tibetan Buddhist tradition.
Today I pulled the “Drive All Blames Into One” card and here is the commentary for our collective reflection:

Drive All Blames Into One
This is advice on how to work with your fellow beings.
Everyone is looking for someone to blame and therefore aggression and neurosis keep expanding.
Instead, pause and look at what’s happening with you.
When you hold on so tightly to your view of what you did, you get hooked.
Your own self-righteousness causes you to get all worked up and to suffer.
So work on cooling that reactivity rather than escalating it. This approach reduces suffering – yours and everyone else’s…

Why the World is Being Dehumanized:

What Humanism Means to Me, and Why it’s Failing Around the Globe by Umair Haque
When you consider what our grandkids and their grandkids will say about this age, this era, what comes surging to your mind?
I’d say that the wise amongst them might say something like this: “Wow. They were in profound, terrible pain. They were being dehumanized, over and over again. They had to dehumanize one another, just to live.”
But that’s a deeply traumatic experience — to have your personhood, your selfhood, your dignity, purpose, truth, capacity for love, empathy, care, nurturing, taken away from you.
https://eand.co/why-the-world-is-being-dehumanized-ae18ca4c5d8c

The Challenge- Some unsavory examples of us dehumanizing each other from Immigration to Sexual Harassment, shared below to open our minds and hearts, and remind us of the severity and pervasiveness of our inhumanity to our fellow man

How Immigration Raids In August Have Changed A Small Town In Mississippi:
The community of Morton, Miss., is still dealing with the biggest single-state work site immigration raid in U.S. history. Seven chicken plants were raided and 680 people arrested.
https://www.npr.org/2019/11/12/778632550/how-immigration-raids-in-august-have-changed-a-small-town-in-mississippi

McDonald’s Is Sued Over ‘Systemic Sexual Harassment’ Of Female Workers:
The lawsuit against McDonald’s and its Michigan franchise is the latest allegation of rampant abuse and harassment of female employees at the fast-food chain.
Lawyers representing workers say more than 50 claims and charges of harassment of female employees are pending against McDonald’s in courts and at the Equal Employment Opportunity Commission.
https://www.npr.org/2019/11/12/778530312/mcdonalds-is-sued-over-systemic-sexual-harassment-of-female-workers

Dr. Topher McDougal shares some thoughts on the recent Nobel Prize given to three development economists:
Development economics is the branch of economics that deals with how countries go from being poor to being rich. It is broadly characterized by a belief that, for a number of distinct reasons, economies in the poorest countries may behave differently from those in rich countries – most fundamentally by yielding negative returns on investment, leading to the so-called “poverty trap.” By the turn of the millennium, the field had long been dominated by big theoretical debates: Does development aid break cycles of poverty in poor countries? If so, which sectors should be spurred by bilateral and multilateral grants and lending? Or does development aid generate dependency? Is it a form of neo-Colonial exploitation?
https://globaledleadership.org/2019/11/06/dr-topher-mcdougal-shares-some-thoughts-on-the-recent-nobel-prize-given-to-three-development-economists/

Teaching kids empathy: In Danish schools, it’s … well, it’s a piece of cake:
While researching our book “The Danish Way of Parenting; What the Happiest People in the World Know About Raising Confident, Capable Kids,” the co-authors interviewed numerous teachers and students across Denmark to learn how they incorporate empathy in schools and at home. Notably, in the Danish education system empathy is considered as important as teaching math and literature, and it is woven into the school’s curriculum from pre-school through high school.
https://www.salon.com/2016/08/09/teaching-kids-empathy-in-danish-schools-its-well-its-a-piece-of-cake/

On a Lighter Note…

AN OLD WOMAN WALKED UP AND TIED HER OLD MULE TO THE HITCHING POST.
AS SHE STOOD THERE, BRUSHING SOME OF THE DUST FROM HER FACE AND CLOTHES, A YOUNG GUNSLINGER STEPPED OUT OF THE SALOON WITH A GUN IN ONE HAND AND A BOTTLE OF WHISKEY IN THE OTHER. THE YOUNG GUNSLINGER LOOKED AT THE OLD WOMAN AND LAUGHED, “HEY OLD WOMAN, HAVE YOU EVER DANCED?”
THE OLD WOMAN LOOKED UP AT THE GUNSLINGER AND SAID, “NO,… I NEVER DID DANCE… NEVER REALLY WANTED TO.”
A CROWD HAD GATHERED AS THE GUNSLINGER GRINNED AND SAID “WELL, YOU OLD BAG, YOU’RE GONNA DANCE NOW,” AND STARTED SHOOTING AT THE OLD WOMAN’S FEET.
THE OLD WOMAN PROSPECTOR — NOT WANTING TO GET HER TOE BLOWN OFF –STARTED HOPPING AROUND. EVERYBODY WAS LAUGHING.

WHEN HIS LAST BULLET HAD BEEN FIRED, THE YOUNG GUNSLINGER, STILL LAUGHING, HOLSTERED HIS GUN AND TURNED AROUND TO GO BACK INTO THE SALOON.
THE OLD WOMAN TURNED TO HER PACK MULE, PULLED OUT A DOUBLE-BARRELED SHOTGUN, AND COCKED BOTH HAMMERS.
THE LOUD CLICKS CARRIED CLEARLY THROUGH THE DESERT AIR, AND THE CROWD STOPPED LAUGHING IMMEDIATELY.
THE YOUNG GUNSLINGER HEARD THE SOUNDS, TOO, AND HE TURNED AROUND VERY SLOWLY. THE SILENCE WAS ALMOST DEAFENING. THE CROWD WATCHED AS THE YOUNG GUNMAN STARED AT THE OLD WOMAN AND THE LARGE GAPING HOLES OF THOSE TWIN BARRELS.
THE BARRELS OF THE SHOTGUN NEVER WAVERED IN THE OLD WOMAN’S HANDS, AS SHE QUIETLY SAID, “SON, HAVE YOU EVER KISSED A MULE’S ASS?”
THE GUNSLINGER SWALLOWED HARD AND SAID, “NO M’AM… BUT I’VE ALWAYS WANTED TO.

THERE ARE FIVE LESSONS HERE FOR ALL OF US:

1 – Never be arrogant.
2 – Don’t waste ammunition.
3 – Whiskey makes you think you’re smarter than you are.
4 – Always make sure you know who has the power.
5 – Don’t mess with old people; they didn’t get old by being stupid.

“When you are inspired by some great purpose, some extraordinary project, all your thoughts break their bonds.
Your mind transcends limitations, your consciousness expands in every direction, and you find yourself in a new, great, and wonderful world.
Dormant forces, faculties and talents become alive, and
you discover yourself to be a greater person by far than you ever dreamed yourself to be.”
— Patanjali