The Boarding on Flight 2017 has been announced……🎤

✂The bad and sad moments ⌛if carried, must be thrown away in the garbage on arrival …..✂

Before the Flight 2016 ends….
Allow me to Thank All  my Amazing  Friends Who Made 2016 Beautiful For me and my family
We Pray that you all be Blessed With an Awesome Year Ahead….
😘😍💝🎁🎊🎉🎈⛄

2016 Retrospective- The Year In Memes:

Memes are no longer slightly embarrassing internet in-jokes but essential and omnipresent expressions of culture. For every day in 2016, Select All has picked one meme that either originated, broke through, or reached its height on that date, and done its best to explain it. The result is a collection of the best memes of 2016 — the funniest, weirdest, most outrageous, and most viral objects. It’s also, for better or for worse, a portrait of our collective unconscious: the story of our attention, and the things that managed to hold it, even briefly, throughout the year.

20 Tips for a Positive New Year:

The Uncommon Decision That Will Make 2017 a Great Year:

Living your best life most likely requires you doing something extraordinary. Few of us maximize what’s possible by just doing what we’re already doing. The big breakthroughs; the big improvements come from making big decisions.

What is the big decision your life has been asking you to make? The clue to answer this question is to inquire of your deepest self “What have I settled for?”  Put another way, the question I most often asked my clients is “If nothing changes, what will your life be like a year from now, or two years from now, or five years from now?  Is that okay?”  If it is, nothing will change. If it isn’t okay then you’re in need of a big decision.

Big decisions are often risky. But safe decisions or no decisions at all will dull your mind and numb your heart. So how do you make big decisions without being reckless?

It’s simple. Every decision you make should be leading you toward the vision of the life you want to live. This isn’t as common as it sounds.  Many times we make decisions to avoid stress. Being clear on what you don’t want is much easier than being clear on what you do want.  But stress avoidance isn’t a vision.  And your personal vision is absolutely essential to your ultimate fulfillment and deep life satisfaction.

So what big decision would lead you to greater happiness, health, love, work and joy?  Do that.

Don’t be impulsive. Don’t be selfish. Be both brave and wise. Plan carefully. Prepare yourself and others who might be affected by your big decision for the worst that can happen . . . then act. Learn what’s working and what’s not.  Be flexible, but have the grit to sustain your direction. Unless you’re planning to skydive without lessons you can survive any setback . . . and you will have setbacks. All big decisions unleash some surprising consequences but nothing you can’t handle if you’re committed to your vision.

The best advice I ever received is to just start living the way you want to live.

That’s what I am doing.

Gratitude- An Attitude AND A Practice- Why and How to be Thankful:

Gratitude is a foundational element of grit and of leadership. Gratitude means being thankful, showing appreciation and returning kindness. Gratitude counterbalances the urge to complain and blame and reinforces the reality of independence and accomplishment; when we feel grateful, we appreciate what’s already present in our lives, even as we strive for more. It strengthens engagement and empowerment. Be a leader whom people want to follow with the simple act of gratitude.  Wishing everyone a happy and healthy new year… Enjoy the video and share your gratitude!

8 of the Best British Christmas Video Ads of 2016:

You may not have seen these circulating on our side of the pond, but Christmas ads in the UK are a big deal. Top store brands pull out all the stops with major productions, heart-touching stories, and a pretty light touch on selling. Here are some of the top ones from 2016. What is your fav?
http://tubularinsights.com/best-british-christmas-video-ads/

How An Unexpected Friendship With A Wolf Transformed A Whole Town

Despite their incredible beauty and their obvious similarities with our considerably tamer canine companions, everyone knows not to play with wolves. So when wildlife photographer Nick Jans and his Labrador encountered a wild wolf behind their home, adrenaline started pumping through them both.

When the wolf approached the Labrador, Nick could only stand helplessly by and watch. But what he didn’t know then, on that cold winter day of 2003 was that that encounter was the beginning of a relationship that defied all logic – and fundamentally transformed an entire community. During the winter of 2003, a jet-black wolf showed up on the edge of suburban Juneau, Alaska. But this wolf didn’t bear his teeth and growl aggressively. Instead, it seemed to long for companionship. Wildlife photographer Nick Jans was on his back porch when he saw the wolf for the first time. Despite the danger, Nick’s Labrador went to meet the visitor. 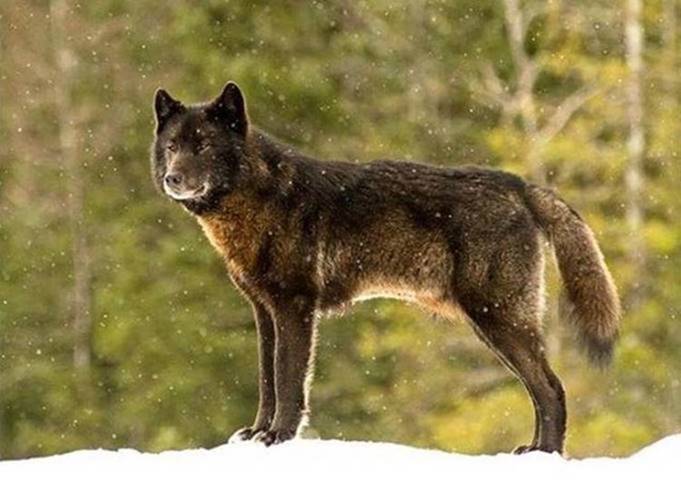 Nick, who had photographed and tracked wolves for years, immediately knew that the wolf was wild. So he was shocked when his Labrador suddenly started to play with him. He hurriedly grabbed his camera, and began to capture the unexpected moment.

After a while, the wolf returned into the wilderness, but it wasn’t long before he returned. The wolf would come to Nick’s house to greet him often and sometimes it even followed Nick when the photographer went skiing. And the wolf was always gentle, says Nick.

“This wolf was downright relaxed and tolerant from the start, as if he had dropped out of the sky like a unicorn,” the photographer told National Geographic.

Years passed and Nick spent much time documenting the wolf. He eventually named the wolf Romeo. At first, many of the small town’s residents didn’t trust Romeo, but they soon realized that he was a wolf unlike any other. 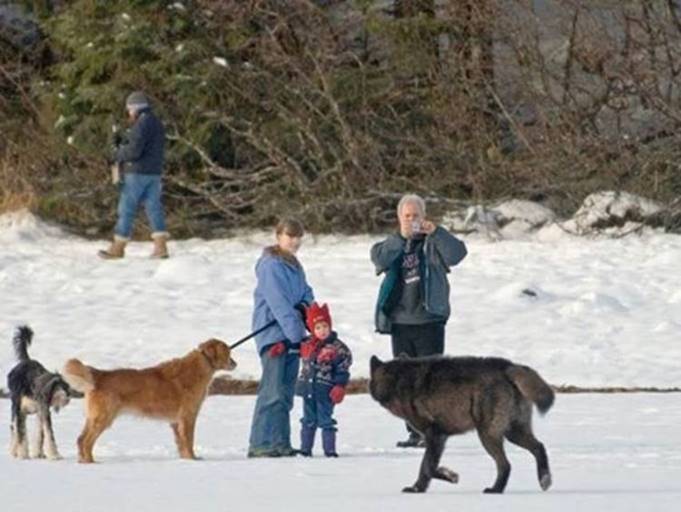 Romeo soon became known by everyone in the area. People took their dogs to Mendenhall Glacier Park so their dogs could meet Romeo. There were never any serious incidents.

Not only did Romeo make plenty of dog friends in and around Juneau, he even sometimes interacted and played with humans.

“The wolf would bring out toys that he’d stashed. One was a Styrofoam float. Romeo would pick it up and bring it to [my friend] Harry to throw. He clearly understood the same sort of behaviors that we see in dogs,” Nick said.

“The amazing thing was Romeo’s understanding. It wasn’t just our understanding and tolerance. It was the combination of his and ours and the dogs. We were these three species working out how to get along harmoniously. And we did,” said Nick. 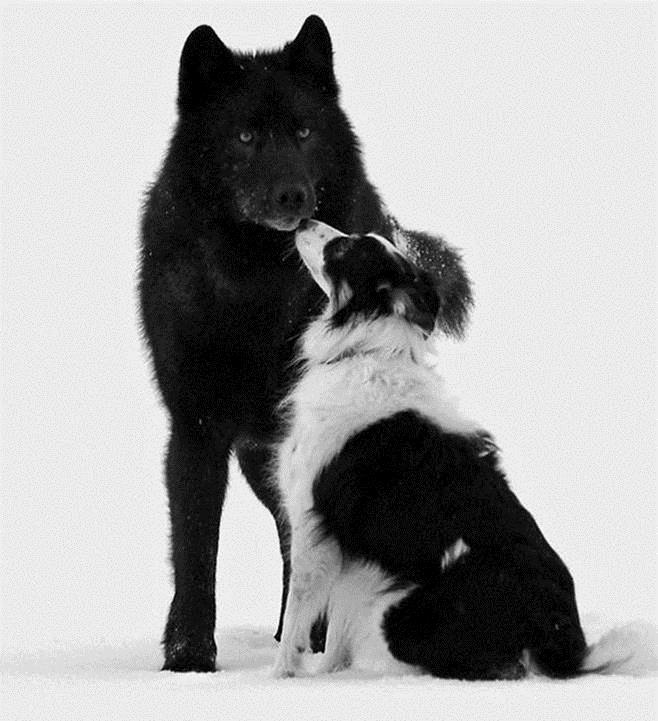 Romeo lived on the outskirts of Juneau for six years. He became an ambassador for nature and a powerful symbol for the entire community.

“He was a pure wild wolf. He was not a pet, as some suggested, that had been released, because then he would have been coming to us for food. He was his own gatekeeper and came and went as he pleased. Sometimes he disappeared for weeks. He clearly was catching and eating wild food with great skill,” explained Nick.

After six years, Romeo’s time in the community ended. He passed away in 2010, but residents will never forget how he transformed the village. “The average life span of a wolf in the wild is three years. Romeo was already full grown when he showed up, and then he lived among us for six-plus more years. So he was at least eight years old at the time of his death,” Nick says.

Shortly after Romeo passed away, the city of Juneau commemorated the wolf, creating a special plaque to honor him. The plaque is installed by the lake he used to frequent.  What a beautiful touch!

That three such different species were able to live alongside peacefully and in complete harmony is so inspiring. It really shows you how wonderful the world and nature can be!

If you are local…
Consider the Epic Mastermind Experience Jan 13th and 14th to kick off 2017 with some verve!
http://www.epicmastermindexperience.com/

“Everybody can be great…because anybody can serve…
You only need a heart full of grace. A soul generated by love.”
– Dr. Martin Luther King