Giving Thanks and Being Grateful:

Happiness IS Contagious- 3 Degrees of Connection

Giving Thanks and Being Grateful

It is well documented that it is hard to be hateful and grateful at the same time.

I hope as you read this, you can find something to be grateful for- however trite or profound- and then maintain an Attitude of Gratitude all year long!

Attitudes are contagious. Is mine worth catching?

So much more than a pair of upturned lips, the smile is the most scientifically studied human facial expression. In her new book, Lip Service, Yale psychology professor Marianne LaFrance, PhD, draws on the latest research—in fields from biology to anthropology to computer science—in an effort to shed some light on the happy face. Here, six facts that may make you, well, you know.

People with big grins live longer. In a study published last year, researchers pored over an old issue of the Baseball Register, analyzing photos of 230 players. They found that on average, the guys with bright, bigmouthed beams lived 4.9 years longer than the players with partial smiles, and 7 years longer than the players who showed no grin at all. We can’t credit wide smiles for long life spans, of course, but smiles reveal positive feelings, and positive feelings are linked to well-being.

There are three degrees of happiness… An article in the British Medical Journal reported that it is indeed possible to spread the love: Within social networks, when one person is happy, the feeling migrates to two people beyond her. So if you smile, a friend of a friend is more likely to smile, too

. …and two types of smiles. Genuine smiles and fake smiles are governed by two separate neural pathways. We know this is true because people with damage to a certain part of the brain can still break into a spontaneous grin even though they’re unable to smile at will. Scientists speculate that our ancestors evolved the neural circuitry to force smiles because it was evolutionarily advantageous to mask their fear and fury.

To spot a faker, check the eyes. When someone smiles out of genuine delight, a facial muscle called the orbicularis oculi involuntarily contracts, crinkling the skin around the eyes. Most of us are incapable of deliberately moving this muscle, which means that when a person fakes a smile, her orbicularis oculi likely won’t budge.

Smiles have accents. When reading facial expressions, different cultures home in on different parts of the face. In the United States, we focus on mouths; the Japanese, by contrast, search for feeling in the eyes. These emoticons say it all:

How Happiness Is Contagious

“Six degrees of separation” isn’t just a good plot line. Science shows the theory has dramatic implications for spreading cheer from one person to the next.

The theory that everyone on the planet is only a half dozen people away from knowing everyone else was popularized by John Guare’s 1993 movie Six Degrees of Separation. Now research by a pair of social scientists might have Hollywood thinking of a sequel: Three Degrees of Connection.

Using statistical analyses of thousands of subjects, a study in The British Medical Journal has shown that happiness actually spreads from person to person, up to three connections away. “So if your friend’s friend’s friend becomes happier, it ripples through the network and affects you, even if you don’t know that person,” says author Nicholas Christakis, MD, a medical sociology professor at Harvard Medical School. Proximity plays a part: A happy sibling who is a mile away can increase your probability of happiness by up to 14 percent; a nearby friend, by 25 percent; and a next-door neighbor, by 34 percent. Interestingly, the effect also applies to smoking and obesity, Christakis has shown. “If people around you gain weight, it changes your expectations about what an acceptable body size is,” he explains. “Our work strongly suggests that when one person quits smoking, loses weight, or becomes happy, others around her follow suit. I am reluctant to suggest you pick your friends solely on this basis, but one could say that helping a friend do better is a roundabout way of helping yourself.”

Focus on the Green Lights in Life and Be Creative about the Red lights:

While we often miss them due to attentional blindness,  it is useful to focus on the Green Lights in our life.

If we are in a hurry, we sure remember all the red lights we hit, but blitz through the green lights with nary a thought… 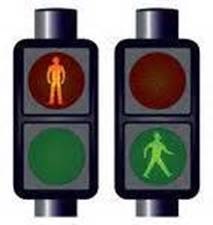 We all hate waiting. That is why many pedestrians don’t have the patience to wait at the traffic light, preferring to cross whenever they deem fit. To increase pedestrian safety, an idea was born: What if we make the red pedestrian traffic light so entertaining, people would be happy waiting? Here is what happened with that idea.

A 65-year-old man walked into a crowded waiting room and approached the desk.

The Receptionist said, ‘Yes sir, what are you seeing the Doctor for today?’

‘There’s something wrong with my penis, he replied.

The receptionist became irritated and said,

‘You shouldn’t come into a crowded waiting room and say things like that. ‘

‘Why not, you asked me what was wrong and I told you,’ he said.

The Receptionist replied; ‘Now you’ve caused some embarrassment in this room full of people. You should have said there is something wrong with your ear or something and discussed the problem further with the Doctor in private.’

The man replied, ‘You shouldn’t ask people questions in a roomful of strangers, if the answer could embarrass anyone. The man walked out, waited several minutes, and then re-entered.

‘There’s something wrong with my ear,’ he stated.

The Receptionist nodded approvingly and smiled, knowing he had taken her advice..    ‘And what is wrong with your ear, Sir?’

The waiting room erupted in laughter…    Don’t Mess With Seniors!

My buddy Jack Abbott is launching a new product on Kickstarter, and he has asked me for our help.  He’s working on a project to help change the way we feed ourselves sustainably on this planet, and an easy first step is CounterCrop, which helps anyone grow great fresh veggies on their kitchen counter.

Here is a link to a short, fun video that explains how it works. CounterCrop launches on Kickstarter on December 4th, and it will be heavily discounted for the first contributors. You can get an email alert to remind you signing up here: www.CounterCrop.com.

Help me help Jack, help the planet & launch CounterCrop by sharing this with your networks, and logging onto Kickstarter when you get the email notice to make your contribution, or buy one for yourself.  Any and all contributions will make a big difference. Here’s to counter culture and sustainable food for all!

Hundreds Of Mountaineers Climb The Alps For Epic Photoshoot

Thanks given to all -including this week’s contributors Larry H, Anu T and Jack A.

Stay peaceful and joyful and pay it forward!

“Lean out in your own way to make a difference in your community,